We are proud to announce that John's Island member, Michael Pierce, will be inducted into the U.S. Squash Hall of Fame in Chicago on Finals Day, October 17th, at the Hall of Fame Luncheon. His primary on-court achievements come on a doubles court. One of the best left-wall players in history, Pierce won dozens of professional and amateur titles and is still the only player to ever win the U.S. national open, 40+, 50+ and 60+ tournaments. Pierce has been a significant leader off the court, as president of the Philadelphia district, builder of courts in Florida, tournament director, benefactor of urban squash and supporter of U.S. Squash. 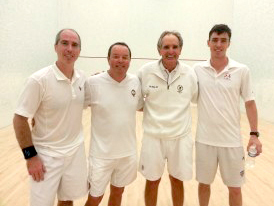